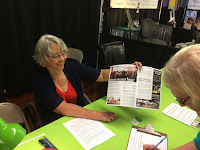 Thank you to our volunteers who braved the smoke to join us at the 2018 Northwest Montana Fair in Kalispell.

We educated the public about problems with legalization, including how people with years to live are encouraged to throw away their lives, and fatal elder abuse.

In Oregon, Other Suicides Have Increased with the Legalization of Physician-Assisted Suicide

Since the passage of Oregon’s law allowing physician-assisted suicide, other suicides in Oregon have steadily increased. This is consistent with a suicide contagion in which the legalization of physician-assisted suicides has encouraged other suicides. In Oregon, the financial and emotional impacts of suicide on family members and the broader community are devastating and long-lasting.[1]
Read more »
Posted by Admin at 12:58 PM

Hall Declaration: " If Dr. Stevens had believed in assisted suicide, I would be dead"

I, JEANETTE HALL, declare as follows:

1.  I live in Oregon where assisted suicide is legal. Our law was enacted in 1997 via a ballot measure that I voted for.

2.  In 2000, I was diagnosed with cancer and told that I had 6 months to a year to live. I knew that our law had passed, but I didn’t know exactly how to go about doing it. I tried to ask my doctor, Kenneth Stevens, but he didn’t really answer me. In hindsight, he was stalling me.

3.  I did not want to suffer. I wanted to do our law and I wanted Dr. Stevens to help me. Instead, he encouraged me to not give up and ultimately I decided to fight the cancer. I had both chemotherapy and radiation. I am so happy to be alive!

4.  It has now been 17 years since my diagnosis. If Dr. Stevens had believed in assisted suicide, I would be dead. Assisted suicide should not be legal.

http://www.intellectualtakeout.org/blog/when-euthanasia-becomes-murder
By Barry Brownstein
In the Netherlands an elderly woman suffering from dementia was held down against her protests as a lethal injection was administered by a doctor. In the days before her “euthanasia” she repeatedly said “I don’t want to die.” The doctor was cleared of wrongdoing.
Another elderly woman in the Netherlands was euthanized due to her supposed “unhappiness” about living in a nursing home. This despite testimony from the staff that she was often “content and friendly.”

IT'S GREAT TO BE ALIVE!

Jeanette Hall, 12 years after her doctor talked her out of assisted suicide in Oregon - Click photo to read her story.